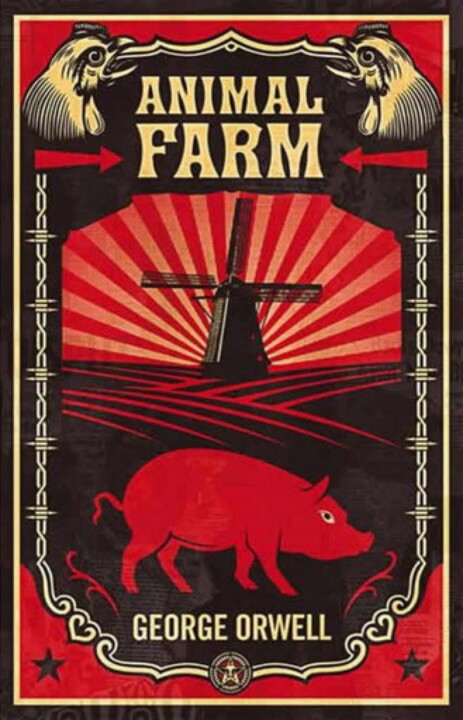 There once was a farm called Manor Farm, which was owned by Mr. Jones, a drunk rustic man. One night, after he went to sleep, the animals gathered in the big barn. They had been called by Major, an old pig who had a message to deliver before his death: as all the animals should know, none of them was free, and all of them were exploited for the man’s profit only. Therefore, he would like them to rebel against the human dominion. In his words, “All men are enemies. All animals are comrades.”. After old Major died, the animals started preparing for a rebellion. The pigs, generally known as the most intelligent of farm animals, were responsible for its organization. They struck the rebellion after Mr. Jones came home drunk one night and forgot to feed them. The animals attacked the house and the humans inside it, expelling them from the farm and taking control of it. From then on, all the traces of Jones’ presence must be eradicated, and the rules of Animalism were established and published:

"Whatever goes upon two legs is an enemy.

Whatever goes upon four legs, or has wings, is a friend.

No animal shall wear clothes.

No animal shall sleep in a bed.

No animal shall drink alcohol.

No animal shall kill any other animal.

All animals are equal."

It all seemed perfect in the beginning. The productivity increased, they had plenty of food and the animals were happy. However, as time went by, the dream of equality started to crumble. Napoleon, the most radical and cruel of the government structure, had Snowball expelled for alleged attempts of sabotage. After that, the situation on the farm grew harder and harder, except for the pigs, who unexpectedly seemed to be getting fatter and fatter. After all, Animalism’s seven commandments soon started to change. “No animal shall sleep in a bed with sheets”, “No animal shall kill any other animal without cause”. Can the dreams of an equal society ever really come true?

This book is a genius work from Orwell, once he managed to perfectly represent the evolution of the communist revolution within the limits of a British farm. “Animal Farm” is a huge allegory of the Russian Revolution and all its flaws. That was what I found more intellectually appealing about it. The thing that worked better for me was the way Orwell depicts each animal species as a specific group of society: the sheep represent the easily-carried and light-minded people that follow everything they are told to do; the donkey stands for the ancient people who no longer let themselves be carried by the enthusiasm of a promising revolution; the pigs are the symbol of the emerging upper class corrupted by power, and so on.

Considering the impeccable way it portrays one of the most remarkable periods of History without letting down the readers that are just looking for a good story to enjoy themselves, I honestly wouldn’t change anything about it.

That being said, I would certainly recommend this book to everyone (and I actually do recommend it often), young or old, being aware or unaware of the Russian History, because even if you don’t understand the range of this book’s criticism, you can certainly understand the way it targets totalitarian regimes and abuses of power.